Robbed in Thailand and Better Because of it!

First of all let me say, getting robbed sucks. It sucks for really obvious reasons like the fact that your possessions are gone, and for deeper reasons, like in my case, making me feel completely alone. I honestly don’t think about this instance very often as it feels like an eternity away. However, I was reminded the other day when catching up with my college roommate, Alex. She recently took a trip to Panama and was relaying to me how after only being there for a couple of hours, her friend’s car was broken into and her backpack with ALL OF HER STUFF FOR THE TRIP was stolen. My first words were “Did they steal your phone?!” and fortunately for her, they did not. Alex then went into detail about how she felt after her bag was stolen and a familiar feeling rose up in me.  I thought I had blocked it out for good, but the one word I would use to describe how I felt after being robbed is wronged.

When I was robbed, it was week 2 of my month-long trip through SE Asia, a.k.a. MY DREAM COME TRUE. My 2 friends and I had finished a wild week exploring Vietnam and we finally made it to the much talked about island, Koh Phi Phi. The name spelling makes it sound beautiful, which is how I expected my time there to be, but the real pronunciation is Ko PEE PEE…like the shit-hole I remember it as (I’m LOL as I write this). Anyways, Koh Phi Phi is a wild party island in Thailand and we decided to stay at the hostel  Blanco Beach Bar. It was exactly what we expected – cheap, loud and on the beach. After 2 raging nights on the island we did an awesome boat tour to the surrounding sites and had an amazing day filled with snorkeling and monkeys. I knew we’d be swimming on the tour and I was worried about losing my phone (hilarious, isn’t it?) so I didn’t bring it with me that day. Instead, I brought my GoPro along and took pictures until it died on me half an hour in. Little did I know, this was only the beginning of feeling pictureless and empty. 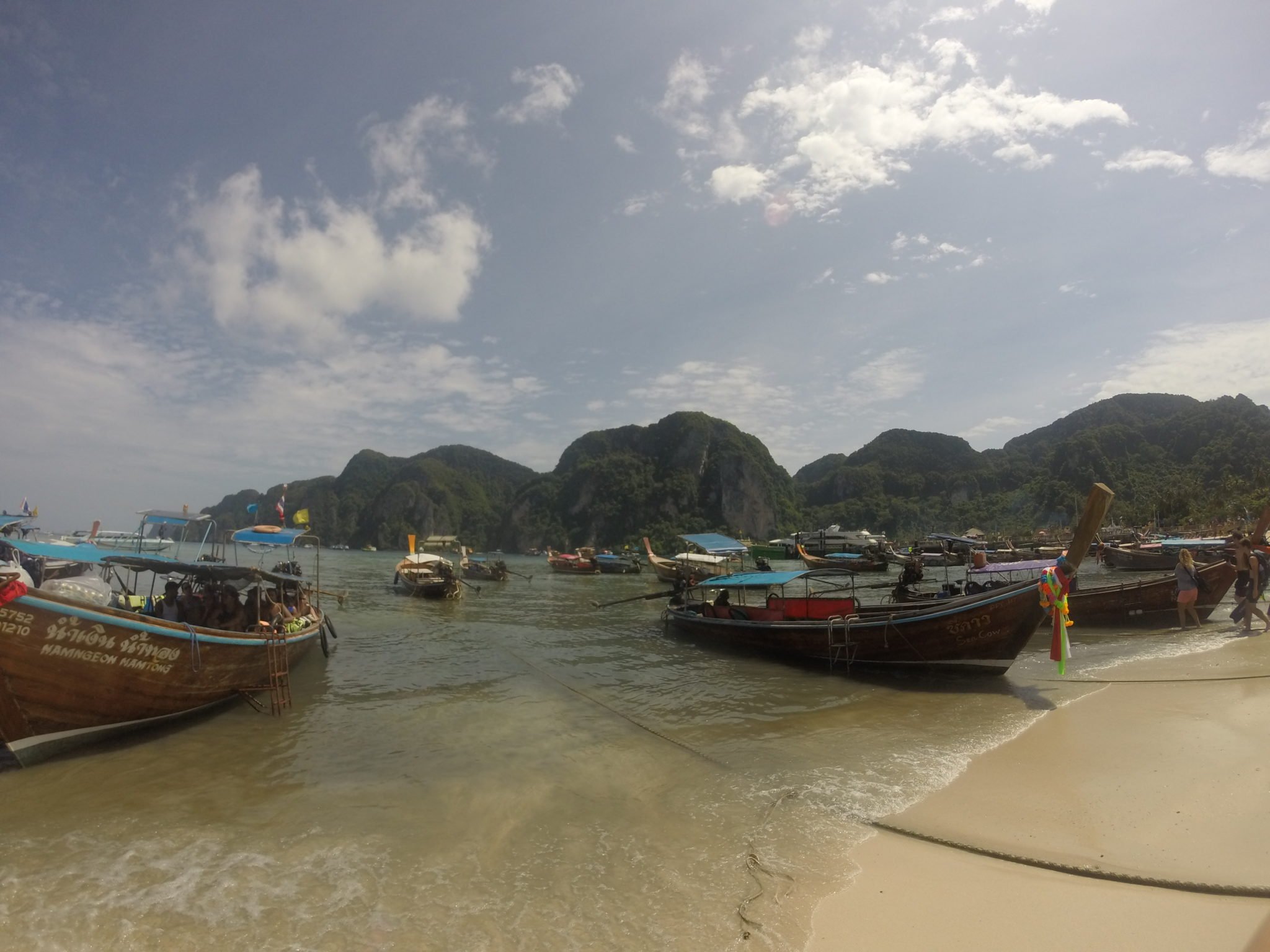 After the tour we were too exhausted to party so the 3 of us had dinner and hung out on the beach with friends. Now picture this: It’s about 4am and you’re on an island where late at night the tide goes waaay out leaving the buoys and boats closer to shore just laying on sand that’s normally underwater. It’s almost a full moon so you can see everything around you and the cove you are in is completely illuminated. All the bars have closed so there is hardly anyone around and it’s quiet. You and 4 friends decide to walk out to where the water is to wade and swim around. Once you get to the water, there’s a huge rock that stands about 2 feet above the water so you put your purse (containing all you hold dear) and clothes on it along with everyone else. You find a good spot to sit in the water about 5 feet from said rock and you are facing it. After sitting there talking for about 30 minutes, everyone is ready to go. You reach for your stuff on the rock but realize…that shit is long gone.

“There are no thieves in Thailand, only opportunists.” – Wise words from Aussie guy that ran Blanco Beach Bar

I genuinely could not make sense of what happened when I saw that my purse was not on that damn rock! I just knew it was there or fell in the water close by. Then I realized my friends dress, another guy’s sandals and a wallet was missing. It took about 10 minutes for it to sink in and for the tears to burst out of my eyes. To my knowledge, what was in my purse was: my iPhone, my friend Sabrina’s iPhone, MY PASSPORT and my debit card. I was in such disbelief of what happened because it was so ridiculous. We were sitting at least 300 meters from shore and it was very bright out. Someone apparently saw us out there and CRAWLED all the way to that rock, reached up silently grabbing everything they could, and crawled all the way back to the beach! To this day I can hardly believe it!

After calling my parents and contacting my bank on a friend’s computer, I bawled my eyes out in the shower (my first shower in 3 days as I recall). I felt alone and deeply wronged. “Do thieves realize the agony they cause?” I wondered (I realize that is very dramatic but that’s how I actually felt). It’s really hard to put into words what it feels like when someone steals from you. So there I was halfway across the world with no passport and no phone (Thankfully I had a backup credit card). The next morning, right after I called the US Embassy in Bangkok in tears, I walked into our dorm room as my friend Sabrina was pulling out her laptop. I will never forget the look on her face as she pulled her laptop from the case and then reached in again…this time pulling out 2 passports! We both kind of just stared at each other because neither of us had any idea how my passport ended up in her laptop case. I have no recollection of putting it in there. I guess I must have shoved it in there the day before when I opened our small locker or something? I don’t know. Both my friends said “Tara, remember at the beginning of the trip when you told us if you were robbed you’d rather lose your passport than your phone? Still feel that way?” I certainly did not. 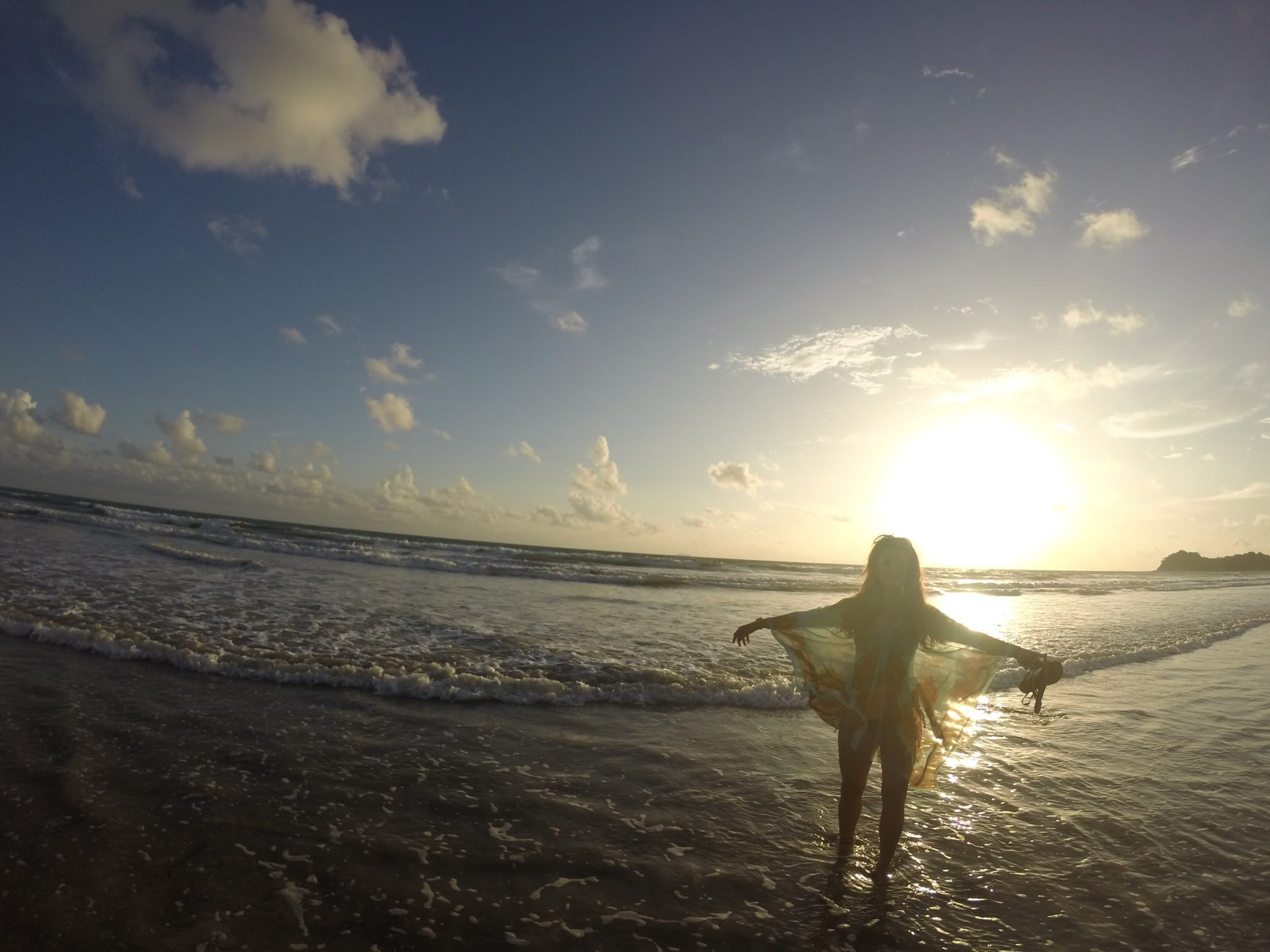 Connection Is Everything (and I’m not talking about wifi)

Having my phone stolen really put a damper on my trip. I tried to just shake it off and not be petty and all attached to my silly phone, but something was really getting to me. It’s just an inanimate object, but we spend SO much time on our phones and pour so much information into them that they really become a little extension of who we are. I felt a piece of me was actually missing. However, it was not my phone I was missing, it was my connection to the ones I love most. Nowadays it’s easy to be far away from all you know because we have phones and the internet. How far away can you really feel when your mom Skypes you while she’s eating breakfast? I could no longer call my family and share photos with all my friends and see theirs. While I felt lonely often during my 5 months in Asia, losing my phone caused me to feel actually alone for the first time. Of course I had wonderful friends with me on the trip, but I had no idea how much my family and friends back home contributed to me feeling loved and encouraged.

Often I find that in life when one thing goes wrong, that’s rarely the end of it. Not only was my iPhone gone, but my GoPro stopped working as well and did not save the majority of photos already taken due to some configuration error/need for update. You can imagine what a bummer it is when you are having the time of your life but don’t have a camera to capture any of it (In hindsight I should have bought a disposable camera somewhere. Remember those?). Nonetheless, our trip continued on. My friends and I left Koh Phi Phi and continued our trip as planned to Bangkok and then Cambodia. 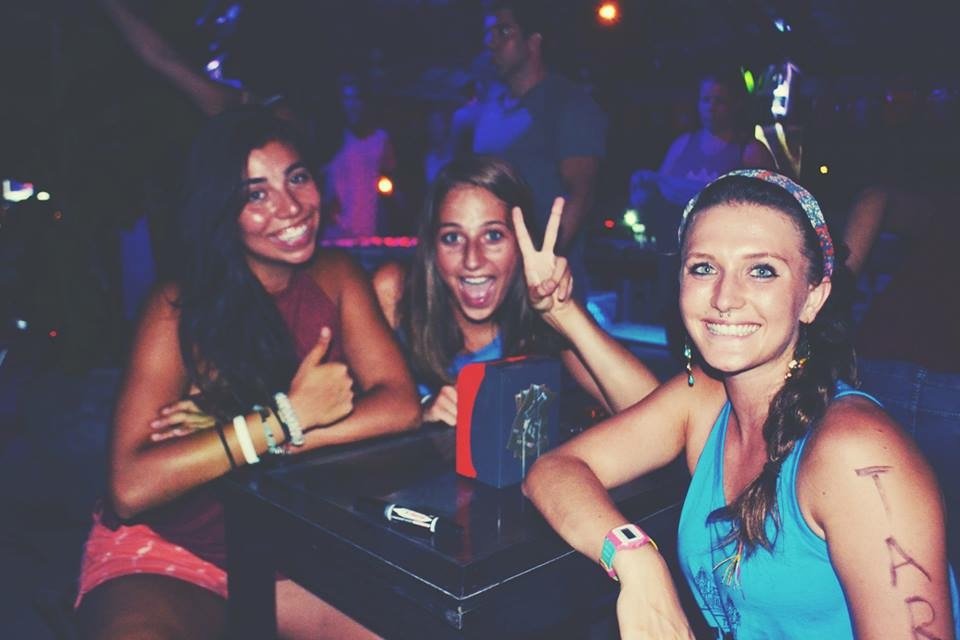 When it came to the last leg of the trip, my friends and I parted ways. I headed to Chiang Mai, Thailand before home to FL and Sabrina and Lindsay were off on their own too. The only pictures I have of my time in Chiang Mai are from the Elephant Caretaker Village tour guide. The guesthouse I stayed at had no computers, so whenever I needed the internet I walked up the street to this little internet cafe that was full of Thai gamer kids. Looking back on my time in Chiang Mai, it is the most at peace I have ever felt. I was truly on no one’s time but my own. No longer did I have the luxury of using my phone as a distraction every time I was alone. I moseyed along through the streets, ate in restaurants alone, went to the dentist for a cleaning, went for Thai massages and even got my first tattoo. I learned more about myself in Chiang Mai than I did from the whole trip combined. My time in Chiang Mai would have looked very different had my phone not been stolen. My daily routine did not consist of checking my phone 500 times for updates on how many likes my posts received (which is so gratifying) or for distraction from my thoughts. It was just me, disconnected from the web, but more connected to myself and the world around me than I had felt in a long time. Being alone with yourself is a gift, embrace it! 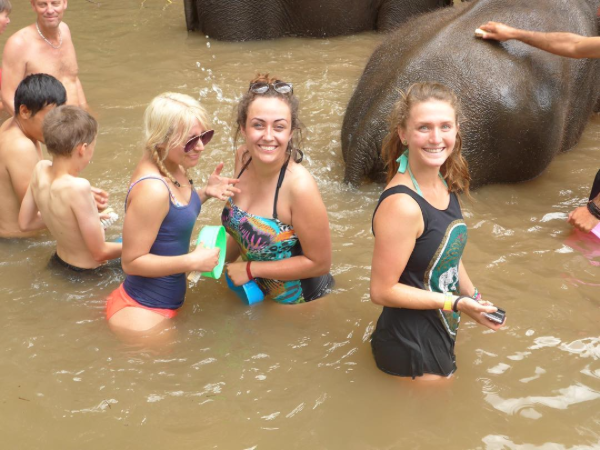 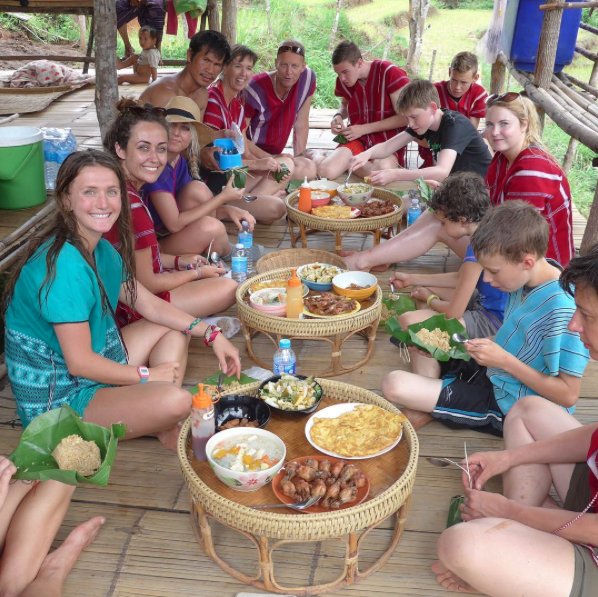 Have you ever been robbed or had a similar experience without a phone for a prolonged amount of time? I want to hear about your stories and experiences!

Stay in the loop

You know you want to.
Go to Appearance > Customize > Subscribe Pop-up to set this up.